When you’re hungry for knowledge, one of the big advantages of working for an agency is that you’re surrounded by an impressive number of experts, each more inspiring than the next. I’ll be chatting with them on a regular basis, reporting back on their latest observations and discoveries, and getting a unique perspective on the future of digital.

I recently had the opportunity to sit down with our SEO strategist Nicolas Duval, one of the people with the most varied digital knowledge I know, and a man with a unique sense of humour. Nicolas arrived at Adviso in early autumn 2018, after a long journey as a senior specialist on the client side in retail and e-commerce at Groupe Dynamite, a brand with 350 stores across Canada, the United States and even the Middle East.

Hi Nicolas! How would you explain what you do for a living?

The way I explain it to people who don’t work in digital, is that I work with websites. At least people know what that means. (Laughs.) My eternal mission is to align websites with people’s search intentions. And, to a point, to improve the search experience with regards to particular industries and sites. Obviously it goes much farther than that, but I usually lose people after the second sentence. (Laughs.) When that happens, I just wrap it up by telling them I work in digital marketing.

Let’s say I wanted to get a deeper understanding of your role as an SEO strategist. What are the broad parameters of your job?

I would start by defining what an algorithm is: A giant line of code that displays and sorts content based on business rules. Facebook uses an algorithm, so does YouTube, as well as Google, which obviously uses several. When you search for images, the algorithm is different than if you wanted to see nearby restaurants, or the latest Stephen King books. It’s a network of multiple algorithms.

Ultimately, to do my job, I have to understand how Google works, what parameters it’s looking at, what its main lines of reasoning are, and what its ultimate mission is. Its main product is a search engine that’s trying to please users by being useful, accessible, easy to use and very complete. There are other search engines out there, Bing, Yahoo, but… Do we really need to talk about them? (Laughs.)

What else is essential to your work?

Everything comes back to the algorithm one way or another. The most important part is to understand each client’s industry and context, as well as their challenges, strengths and weaknesses.

How frequently are the algorithms updated?

Too often! (Laughs.) Or not often enough. It depends on what the algorithm affects. As an example, my site Smokable Herbs was affected on August 1, 2018, by a algorithm SEO people nicknamed the “medic update”. In the past, updates like Panda, Penguin and Hummingbird were better communicated. We knew what to watch out for.

But recently, Google decided to restrict information on updates to its algorithms.

Mainly to avoid the manipulation of search results, in order to increase confidence in the algorithm. But it would also partly be to give Google a certain amount of flexibility to decide that the latest changes are not up meeting expectations. It may be one of the biggest companies in the world, but Google still makes mistakes! The August update was a major one, has disrupted many sites in the medical and financial industries.

What was the change?

Unofficially, the goal was to negatively influence the ranking of sites with low authority. If the perceived value of the domain’s authority is low, particularly in the medical field, the site shouldn’t be ranking in the top results because it could give the user misinformation, leading to health risks.

What do you mean by authority, exactly?

There’s a concept found in literature about Google called E-A-T: Expertise, Authority, Trustworthiness. These three pillars determine the order of search results. So, a medical article written by a PhD in a scientific journal will (and should!) have more weight than the old wives tales peddled by my uncle Bernard who goes fishing every week. (Laughs.)

So initially, Google’s update was trying to be responsible?

After the fake news scandal, we saw some of the major players like Google and Facebook starting to adapt their algorithms in order to distinguish fake from real. The intention was good, on paper. But in practice, there was a considerable negative impact. Companies lost between 50% and 80% of their revenue because their domain authority wasn’t sufficiently qualified, and it happened overnight, without them changing a single thing to prompt it. For companies that rely on the web to generate profit, the situation was dire.

What should people do when something like that happens?

The best thing, surprisingly, would have been to do nothing. Eight months later, on March 12, 2019, another update gave 60% of the domains that were negatively impacted their ranking back. Putting measures in place to deal with the change would have been costly, and served no purpose, since Google rectified the situation itself.

But otherwise, a more holistic analysis is required. We will therefore have to think about ways to align with Google’s EAT pillars, such as by sharing the expertise of our company with that of our experts and by mentioning credible external sources.

Do we really have any choice but to follow the rules imposed (sometimes without our knowledge) by Google?

Many people say, “Keep producing good content! Keep building up your site!” It doesn’t matter how the algorithm perceives you, Google’s main mission is to meet users’ needs.

Make your site the best so Google would be embarrassed not to rank it well.

So it’s true, we have no choice but to trust in an imperfect algorithm. And hey, sometimes it can even work in your favour. You could have an obsolete site (or even technically horrible) and still be well ranked for relevant requests.

What are the main things you expect from an algorithm, and what are your concerns?

The concern I have right now, is that the impact on smaller players has the potential to be colossal. There tends to be a movement towards paid media to offset any losses in organic. My fear is that Google and Facebook (where this is already happening) will cut organic and replace it with paid. It becomes a vicious circle. Google wants to make users happy and continue earning profits, but the majority of traffic will always be organic. People can recognize an ad.

Paid results used to be to the right of organic results. Now they’re above them. And on mobile, they take up even more real estate. They might eventually add images for paid results to provide an even greater incentive to click, and something else to charge advertisers for. It’s not healthy. It doesn’t allow smaller players to carve out a space for themselves, to add value. The danger for Google would be to lose sight of its mission to first of all serve the needs of users.

At the same time, a well-built SEM strategy paired with an organic strategy could make you even more effective. No one is trying to say that paid is the devil! (Laughs.)

A media strategy can really benefit an industry. Facebook and Google are still the best platforms to create super interesting media strategies. It’s just that we can’t let organic give way to paid media any more than we’re seeing now. The most important thing is always to respond to the user’s needs, and I don’t believe that paid media can always do that.

Because responses would be dictated by dollars, not intentions.

Exactly. We are seeing that paid results are slowly taking over Google Maps, for example. Other verticals, like Google Images, are going to start seeing the emergence of ads.

Is that a concern or a fact?

It’s happening now! The concern is that it will start to get harder to tell the difference between paid and organic results. That Google will try to further monetize every category of search result. 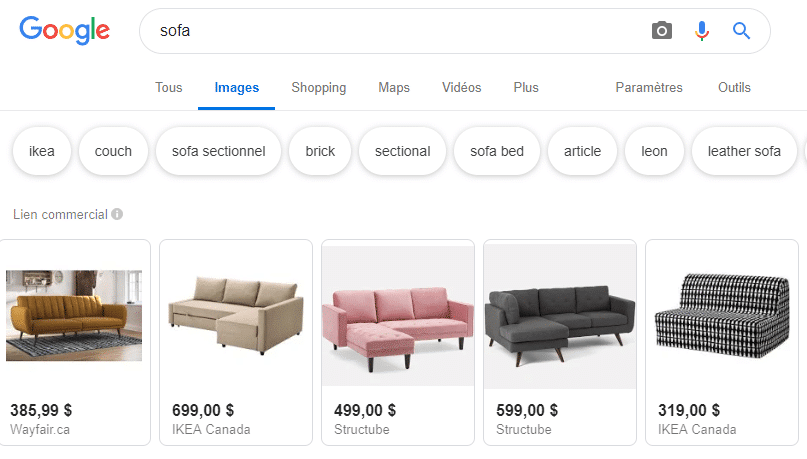 Yes, and Pinterest too. They present visual search results using algorithms adapted to images. For Instagram specifically, people are very excited about in-app checkout, which is about to be made available to advertisers.

But is Instagram going to once again bet (too much) on monetization?

You have to find the balance between the relevancy of search results and the monetization of the platform. The thing that’s interesting about this platform, is that it was already well-used by retailers to showcase their products, but it was missing this element of monetization for the advertiser, so they could have access to more functionality within the platform. Facebook was already doing this, though to a small degree.

All this with the idea of improving the user experience, and reducing irritants by decreasing the number of clicks required to carry out a transaction.

Absolutely! And through the years, we’ve come to understand that users want to stay within the same platform. Social traffic has an excessively high social bounce rate and a far lower average session time.

Let’s finish on a positive! What wish would you like to see come true, algorithmically-speaking?

One wish? I’d wish for better optimization of the platform for users. I’d wish that a site that goes online tomorrow with an excellent product could be seen, consumed and appreciated the same way as a site that’s been up for ten years. That everyone could have the chance, through a free market, to be discovered.

Another wish would be for Google to (re)start trusting its community, to give a bit more detail, without getting too granular, so that people can understand the reasons behind changes in ranking. It always says the same thing “We established our guidelines years ago, and nothing has changed.”  But I recently learned from an article I read that a tag, RelNextPrev, that I’d been using for years, is no longer taken into consideration!

It’s embarrassing for Google, because they are changing the tags they’ve been recommending for years, without telling anyone. Thankfully though, it’s fairly rare!

If we want to go deeper into the subject, is there reading you would recommend?

Yes – I get asked that question a lot. There are individuals and companies developing great content. I really like:

And, of course, our content marketing team is a very reliable source as well! (Laughs.)

Thanks so much for your time, Nicolas!

It was my pleasure! Don’t hesitate if you have questions.

Interview with Hugo Martin-Bonneville, customer experience strategist: Strategy does not only belong to strategists

Interview with Kristel Salesse: Finding the balance between intuition and logic

Interview with Sébastien Neveu : 5 inbound trends to watch in 2019