Social Media Business Strategy
Too often, Facebook pages use paid to compensate for a lack of effort in organic. Convinced by the social network and its statistics that traditional posts – read, non-sponsored – have no reach or appeal, brands are overwhelmingly turning away from organic strategy and prefer instead to systematically boost their posts. Not only is this attitude lazy, but it’s a strategic error and an inversion of the value chain: no paid strategy can ever make up for bad organic practices, but a good organic strategy can multiply the impact of your $.

Recently, a Hubspot article prophesized the upcoming death of organic. Even though the overall message encouraged readers to fight the algorithm and slow the demise, what most marketing directors will retain from the article is its apocalyptic prediction: “Facebook says you should assume organic reach will eventually arrive at zero.” But a trend is not a death sentence. To fully understand the situation, we have to take a big step back…

In 1973, an American sociologist named Mark Granovetter published a landmark study: The Strength of Weak Ties. He postulated that our social networks are made up of strong and weak ties. The strong ties are the ones that link us to our closest friends and family, while the weak ties are the purview of work colleagues and acquaintances. According to Granovetter, every one of us is at the center of a cluster of varying size, made up of both strong and weak ties. But the counter-intuitive discovery he made over the course of his research is that information travels through weak ties: it’s by travelling across the dotted lines that connect one cluster to another that it spreads throughout an entire community (see illustration below). 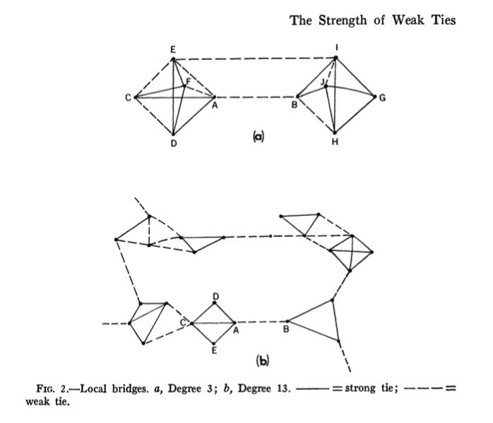 Granovetter didn’t know it yet, but he had just exemplified the core of social media: this theoretical model illustrates how information goes viral. Organically, the transit of information on all social networks operates on this principle. In a January 2012 blog post a Facebook employee, Eytan Bakshy, celebrated Facebook’s participation in the democratization of the transmission of information and pointed at the sociologist’s work to illustrate his point. “Weak ties help spread novel information by bridging the gap between clusters of strong tie contacts.  The strength of weak ties informs much of the popular understanding of information spread in social networks. […]The research suggests that Facebook isn’t the echo chamber that some might expect – online social networks may actually increase the spread of novel information and diverse viewpoints.” This was before the election of Donald Trump and the naïve discovery of filter bubbles.

What’s changed since 2012? Two things: Facebook has doubled its number of active users, and it went public. In other words, it had to contend simultaneously with an unprecedented bottleneck of content, and with satiating the voracious appetite of its shareholders. The company’s stroke of genius was to solve both problems with one stone. How? Through the magic of algorithms.

In 2012, we were still living under the aegis of the prehistoric “Edge Rank”. For the youth out there, this algorithm determined what content would be posted in newsfeeds based on three factors: the relationship between the sender and the receiver (the strength of the tie that connected them), the attractiveness of the content (a photo was worth more than a text post) and the freshness of the publication (a premium was put on newness). But in 2013, Facebook devalued and buried Edge Rank. From that point on, its algorithm would take into account more than 100,000 data points (!) to determine what content would display in each newsfeed. And it was impossible, of course, to figure out the secret ingredient.

Since then, Facebook page reach has not stopped dropping. A social@Ogilvy study estimates that pages’ organic reach has dropped from 12% in 2013 to 6% today. As the algorithm triages an increasing amount of information more and more ruthlessly, it’s become mechanically all but impossible for pages to reach their least engaged community, and by extension to draw in new fans. In the end, it comes down to logic. Every community manager has had the same bitter realization: organically, it’s often the same people who comment on your posts and interact with you. This tight community, this core fan base, is what’s left of your strong ties. The weak ties? Facebook has progressively cut them out. Actually it’s done one better: it’s monetized them.

This is the second phase of Facebook’s algorithmic rocket, the one that propelled the social network into the stock exchange stratosphere. To compensate for the drop in reached caused by the change in the algorithm, it allowed pages to pay to get it back. In short, Facebook completely turned Granovetter’s principles, which are at the heart of its very structure, to its own advantage. First, it voluntarily decimated the narrow bridges connecting clusters and ensuring the organic transmission of information, then it told brands they were welcome to rebuild them with bricks made of ads. This modification of the algorithm is a classic example of military strategy: whoever controls the bridges usually wins the war.

Does all this mean that pages should give up? Accept the idea that organic consumption is a thing of the past? No, just the opposite. What’s important to understand, is that even perverted, even buried, even twisted to Facebook’s advantage, Granovetter’s laws remain unchanged: organically activate the weakest ties and your content will start circulating again. The challenge is notoriously steeper than it was five years ago, but it’s not insurmountable. And you’ll be rewarded by seeing your efforts increase in profitability: at the end of the day, you’ll spend less for more authentic popularity. Add a targeted budget to the mix, and watch your posts take off!

But why, then, is this strategy not more popular among the pros? Three major obstacles often discourage Facebook pages:

For high-pressure marketing departments that need to show short-term results, time has become a rare commodity. Taking months or years to build an engaged community is a luxury. There’s messaging that needs to get out, impressions to gather, campaigns to get off the ground. So, because we lack time, we spend money instead. We pay per click or per impression for results that we could have gotten, at least in part, by doing some basic work on organic.

The illustration below represents the Likes of a Facebook page that started a paid acquisition campaign in March, and a rigorous organic strategy in April. Look at how, with the same budget, the Organic Likes/Paid Likes ratio has gradually reversed. As of October, 2/3 of new page Likes were free, and 1/3 were still paid. The exact opposite of what we saw in April. The problem is that it took five months to get this result: an eternity when you expect social media to deliver instant results. 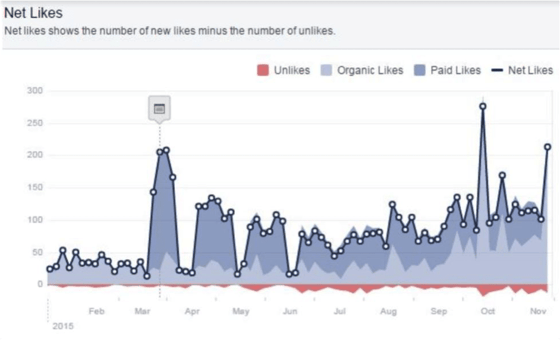 To use a military analogy, good organic strategy requires multiple surgical strikes to succeed. We’re not talking about behavioural targeting here, but about editorial efficiency: in the absence of dollar amounts, more often than not engagement rate (number of people engaged/reach x 100) is the primary KPI to watch. Given that every element of a post can affect this rate – from the title to the text, not to mention the photo, description and time of day, you need every post to be a home run. Is your goal to drive the user to a landing page? Then the title of the post should give enough to intrigue the user, but not require them to click, and it needs to be readable within the 4 seconds it takes for a reader to make a decision. Aiming to generate interaction on the post itself? Here, economy of information is less important, all that matters is its ability to make people react. Even if these two strategies aren’t mutually exclusive, each business objective requires its own editorial methodology and language.

What matters most in this whole thing is your ability to repeat these surgical strikes again and again, to increase the social relevancy of the page. Remember that Facebook’s algorithm works like a virtuous circle: each viral post increases the reach of the next one, and so on and so forth. But inversely, this virtuous circle can become vicious in the case of successive under-performance. That’s why so many pages complain about the ineffectiveness of their organic posts: without a rigorous publication strategy, they annihilate the impact of their occasional coups with chronic poor results.

To come back to the use case we were looking at above, the organic strategy of this Facebook page was primarily to drive social users to a landing page. All its organic efforts were therefore focused on generating clicks. The illustration below speaks for itself: from the 4th source in April with 11% of traffic, social (purple line) had become the top source by October with more than 30% of traffic. All that without spending $1. 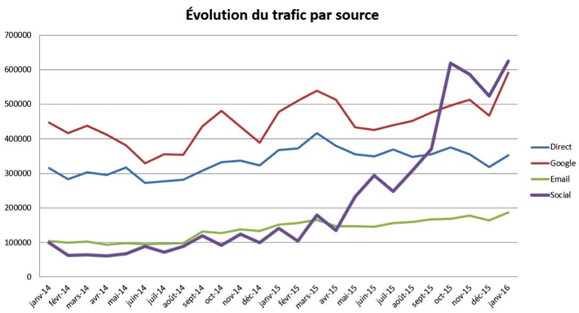 3. Organic strategy requires you to give fans what THEY want

The corollary of these requirements in terms of time, consistency and performance is that your fans need to be your central focus. Something that should be obvious but isn’t: too often, internal priorities take up so much time and energy that we forget about what the public wants. Using a paid strategy, this reality can sometimes be buried under all the $ that allow us to reach our business goals anyway, but in organic you pay for it heavily. To correct this inertia, the impulse is to stop publishing the content, the campaigns, and the messages that don’t work. But how many marketing departments have that kind of luxury? The other solution consists simply of modifying the way content is produced to better suit the preferences of the audience: change the narrative, the type of content, the voice, the campaign scenario… As they say in journalism, “There are no bad stories, just bad angles.”

Bigger organizations might be tempted to cast all these considerations aside. After all, why kill yourself to organically activate your weak ties when a comfortable budget would accomplish the same thing? But that would be doubly wrong. First of all, the KPI that measures the actual effectiveness of a campaign, the famous return on investment (ROI), depends on organic criteria, as we’ve seen. You can buy impressions, reach and even engagement, but you can’t buy an engagement rate. Every post therefore needs to be well thought out, conceived and published to perform organically, then boosted with a $ investment once you’ve seen that the post has legs.

Above all, keep in mind that every weak tie is a strong tie in the making. It’s worth speaking to these people regularly and correctly to strengthen the link. While a paid campaign can easily reach any target audience, it will never have the power of organic to engage people over the long term and build an enduring relationship. The same holds true in the real world as the virtual one: you can buy friends, but you can’t buy their loyalty.

Sears.ca : you’ve got the power…

The power of AI and CX, together

Why is AI essential to your future as a marketer?

Programmatic Buying: The Honeymoon’s Over