In 2015, the introduction to a study conducted amongst more than 4,000 business leaders by MIT Sloan Management Review stated the following:

“The history of technological ad­vance in business is littered with examples of companies focusing on technologies without in­vesting in organizational capabilities that ensure their impact. In many companies, the failed imple­mentation of enterprise resource planning and previous generations of knowledge management systems are classic examples of expectations falling short because organizations didn’t change mindsets and processes or build cultures that fostered change.”

Organizational culture is without doubt the element that is most often missing from the digital transformation strategies or annual plans I’ve had the opportunity to evaluate, or to which I’ve been invited to contribute. However, while strategy describes which road should be taken, culture is what drives the company on its journey. In addition to being essential to a group’s capacity to evolve, culture is also a critical element when it comes to the rapidity and efficiency with which desired changes can be effected. 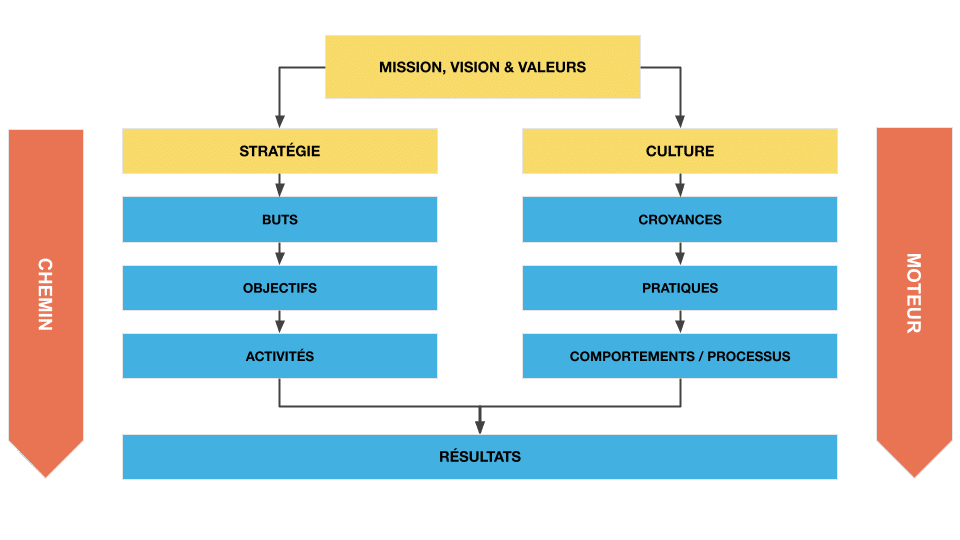 Many companies have implemented platforms and technologies, yet they absolutely do not exploit them for their full value. Other companies have big digital transformation projects that are slow to produce visible results, which prevents them from challenging market leaders. Yet others are incapable of attracting or, even worse, retaining the talent they need to ensure the proper functioning of their new technological expertise to stay competitive.

For many managers and leaders, change is hard.

We also often hear the phrase, “It’s often the case that employees are afraid of change.”

The reality of this anecdote is crystallized in the result of a Korn Ferry report, in which we learn that 84% of business leaders believe that their organization does not possess the capacity and skill needed to realize their digital ambitions.

If these leaders put the question to their employees and the latter answered honestly, they would learn that their employees are not really afraid of change. They simply don’t have confidence that their leaders (or their organization in general) can make their ambitions a reality. This is a problem that can’t be overcome by any strategy, no matter how brilliant or perfectly executed.

For companies like HubSpot or Bandcamp, the answer to this question is “Yes!”

HubSpot has a team that is dedicated to company culture and whose work involves the management and maintenance of that culture, in the same way that other teams manage, for example, customer service.

In addition to the acclaim garnered for their eponymous product, Bandcamp leaders are known for their book Rework, in which they elegantly affirm that it’s impossible to simply “invent” a culture (by writing down its values and asking employees to conform to them). In their opinion, culture is first and foremost the sum of all behaviours within a company, and in particular of those behaviours most regularly adopted. In short, culture is primarily a matter of collective habits.

We can therefore view Law 101 or other government policies as being initiatives aiming to design a certain culture. Inversely, inaction can also produce cultural effects, which are often negative, to the point where HubSpot also talks about having “cultural debt,” in the same way that we speak about technological debt, with the resulting effects and consequences being similarly disastrous.

In any event, a study conducted by BCG reveals that it pays to be interested in culture. Amongst the companies surveyed who had observed strong or extraordinary performance gains for over three consecutive years after establishing a transformation strategy, 79% affirmed having established cultural changes by explicitly naming and defining the behaviours they wanted to encourage at their companies. These are convincing results that should be a source of inspiration for those more timid organizations who hesitate over and delay any serious thought about the issue.

Certain levers already exist. It would be wise to start by ensuring that performance evaluations are handled diligently and that this process focuses on ideas that are important to the company. For example, if you would like your employees to innovate more, this element can be incorporated into evaluation criteria or even weighted more heavily if it already appears as part of your evaluations. In the same vein, a similar approach should also be applied to the company’s recruiting and hiring process.

That said, this won’t be enough. As we’ve seen previously, business leaders have a big share of the responsibility and are just as important when it comes to whether their organization has the capacity (or lacks the capacity) to change and adopt a culture oriented towards continual evolution. Putting in place the right habits and applying them as often as possible seems to be the key to resilience for many firms. Just think about Brian Chesky, the co-founder of Airbnb, who even today puts together a weekly missive addressed to his employees in which he talks about both things that are going well and things that are going not-so-well. Implemented at a time when all travel plans had to be put on hold, this practice needed the pandemic to make its advantages evident, one of which is the way it contributes to developing a connection based on trust between employees and the organization’s leaders. Brian Chesky has also credited this practice with being one of the main factors that have helped Airbnb get through the crisis brought by COVID-19—a crisis during which the company had to terminate a quarter of its workforce and most of its independent contractors. While many companies would need years to recover from those kinds of cuts, Airbnb has already mostly recovered its operational stride.

So it’s definitely the role of business leaders to establish practices and habits promoting the evolution of a strong company culture. Here are 4 avenues for generating significant positive effects on organizational culture, which I strongly recommend adopting if you haven’t already:

In closing, you should simply remember that many principles that apply to our personal lives also apply to groups. The old adage about how you can’t control the future, but you can control your own efforts which largely determine your future, also perfectly applies to organizations and the desired cultures to be adopted. Basically, the simple fact of transforming daily habits within a group has the potential to cause many more effects than can be covered in any road map, even if it were 35 pages long. In any case, ensure that your transformation plans include concrete instructions on your organization’s culture.

Edouard tackles the business challenges of Adviso's clients through a generalist career in several fields. Having worked in technological creativity, data analysis and business strategy as well as digital innovation, Edouard has a unique ability to identify original solutions to complex problems. The quality of Edouard's career has been recognized several times through various national and international competitions.