Are you anguishing over the fact that your new product page isn’t achieving the results you want? Has your website performed less well since its redesign? Feel like you need a crystal ball to know which version of your landing page would work best?

The main goal of CRO is to help companies reach their business objectives and optimize their platforms’ key performance indicators (or KPIs), whether we’re talking about a small start-up, a big multinational, an e-commerce or services site, or even a blog.

There are many advantages to a continuous optimization program, and the list of items below is far from  exhaustive. For the purposes of this article, we’ve decided to focus on these 5 benefits:

So without any further delay, let’s discuss each of these continuous optimization advantages in-depth.

CRO optimizes user experience by ensuring coherence between the media campaign messages or creative and the content displayed on the landing page. Best practices are respected so the site can offer visitors the best online experience possible and thereby increase the conversion rate for a page or campaign.

Possibilities for optimization include, for example, the value proposition offered to the targeted audience (also known as “What’s in it for me?”), the order of information presented or even the page design (contrasting buttons, highlighted key product or service benefits, etc.).

The result? A reduction in your acquisition cost for new customers, which will in turn increase their value and your revenue per visitor. The phrase “turning visitors into customers” takes on its full meaning here, and your media campaign manager will definitely thank you.

One of the goals of CRO is to help users perform an action—or in other words, help them convert.

The word “friction” refers to all the little issues that disturb users’ online experience, the things that irritate them and cause anxiety and which, in the end, increase their cognitive load and prevent them from focusing on the action to be performed.

One of the missions of CRO specialists is to anticipate problems that could arise and resolve them in advance, particularly through the addition of cognitive biases or persuasive elements.

They will use social proof, for example, in the form of customer feedback and tips to reassure prospects. In this way you can make use of the authority bias to strengthen the credibility of the brand in situations where the user is not already familiar with it. 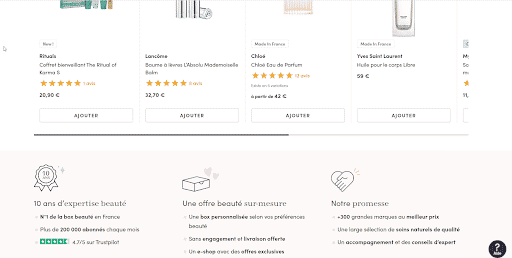 Here, blissim.fr displays customer feedback on its products on its landing page. It also uses the TrustPilot rating to strengthen its brand credibility, thereby fulfilling new customers’ need to be reassured.

On its landing page, Glossier uses the authority bias (via Vogue and Time magazines) to strengthen the credibility and recognition of its site.

Naturally, an adequate value proposition will also help reduce the negative effect of these impediments to conversion. The same goes for cleaning up the page design, which will improve in efficiency after all distracting elements and non-essential information are removed.

Did you know that redesigning a site without first testing the new version before its final installation might be an expensive mistake?

According to Widerfunnel, it’s not unknown for companies to note a 20% to 40% reduction in their websites’ conversion rates after a redesign implemented without any prior user testing.

That’s why it’s crucial for any organization to make changes to its website progressively, reconfiguring it one page at a time. By proceeding slowly and methodically, the relevance of every modification you intend to make can be validated before implementation during a testing phase for new designs, which is effected by way of user or A/B tests.

This progressive, less radical approach avoids financial losses caused by a reduction in your conversion rate. It also lets you save time, considering the number of hours that are lost if you need to return to an older version or re-optimize the design (I’ll just let you imagine how discouraged your UX and marketing teams would be in that situation).

Furthermore, by systematically testing all the iterations made to a site, you can end up knowing with certainty whether some aspects are improved or harmed following the platform redesign. Basically, by comparing the reconfigured version to the original during the same period and with the same level of traffic (which prevents any bias from distorting the results of your analysis), A/B tests measure exactly what impact a change will have on a KPI, thereby removing any doubts you might have about the effectiveness of proposed changes.

Plus continuous optimization can help you avoid having to fully redesign your site, or at least delay it a bit! Both time-consuming and expensive, redesigns aren’t always justifiable (for example, when a site’s technology is still functional or maintains a professional look).

In any case, whether for a complete site redesign or to make some adjustments to an existing site, a progressive approach is the recommended solution for avoiding any nasty surprises.

When an A/B test is performed, you uncover a gold mine of information on targeted users. At the end of the exercise, the data are segmented (by device, channel, language, geographic location, etc.) to obtain new insights that will serve to enrich your testing road map.

Making good use of all the data that were compiled to strengthen your understanding of your users is essential, because this contributes to ensuring their satisfaction and encourages them to return to the site.

These insights fuel your thinking about enhancing the personalization of their journey while revealing a lot about customers’ relationships with the content, a specific value proposition, the visuals, the timing when presenting a message or even the behaviour or a specific element on a page.

While this might seem trivial, offering a highly personalized experience on your website will improve your conversion rate while promoting customer retention. This is vital, especially when you consider that it could cost you 6 or 7 times more to acquire a new customer than to keep an existing customer, according to Hubspot.

Charging ahead with finding a solution to a problem without first fully grasping its nature and understanding its roots is a classic mistake that’s still quite common.

To avoid making it, it’s essential to allot enough time during the research phase, which is devoted to identifying the various sources of friction encountered by users. It’s very important to be patient and not get ahead of yourself, because your optimization ideas result directly from this investigation.

The more the better!

The more data you gather, the better you’ll be able to reveal the actual problems with a site and formulate reasonable hypotheses for effectively remedying them.

Basing your analyses in data allows you to make objective decisions based on facts and thereby strengthen the credibility of your optimization solutions and the order of priority for their execution.

Still not convinced of the advantages of conversion rate optimization?

We bet the revealing statistics presented by A/B Tasty, a company specializing in customer experience optimization, will change your mind.

As part of a study it conducted amongst 3,000 organizations, A/B Tasty showed that the average return on investment for companies who adopted CRO amounted to 223%, and that for 5% of those orgs, the return was actually above 1,000%.

Want to learn more about CRO or benefit from support for your optimization processes? Don’t hesitate to call on our team of specialists or contact us directly. We would be happy to lend a hand and help your company achieve its goals!